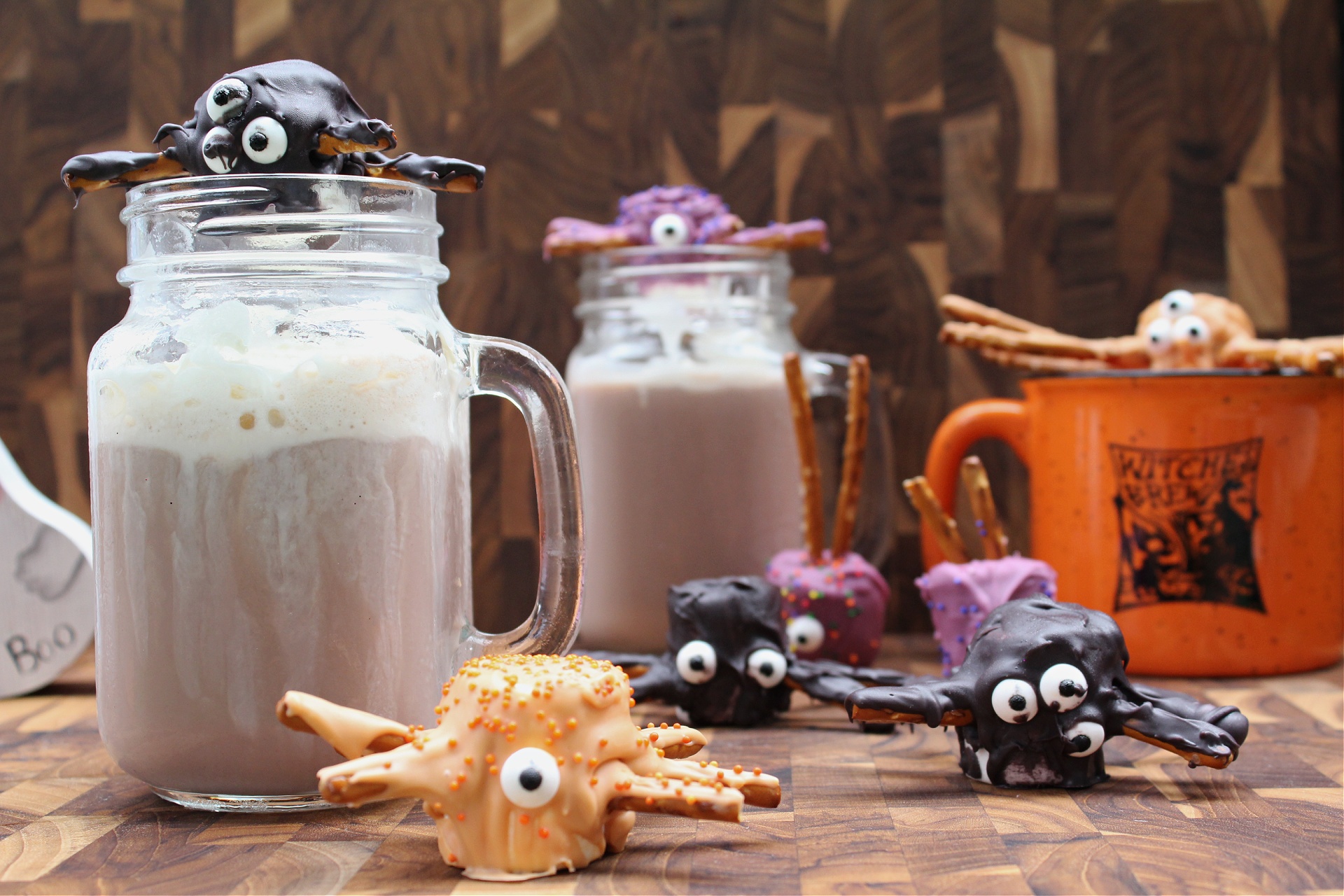 Halloween is almost here! And to celebrate I have some Halloween Marshmallow Spiders and the easiest hot chocolate recipe you will ever make. Because what better place for your Halloween spiders to hang out than on top of steamy cups of hot chocolate?! In fact, dip those yummy spiders right into the hot chocolate…YUM! 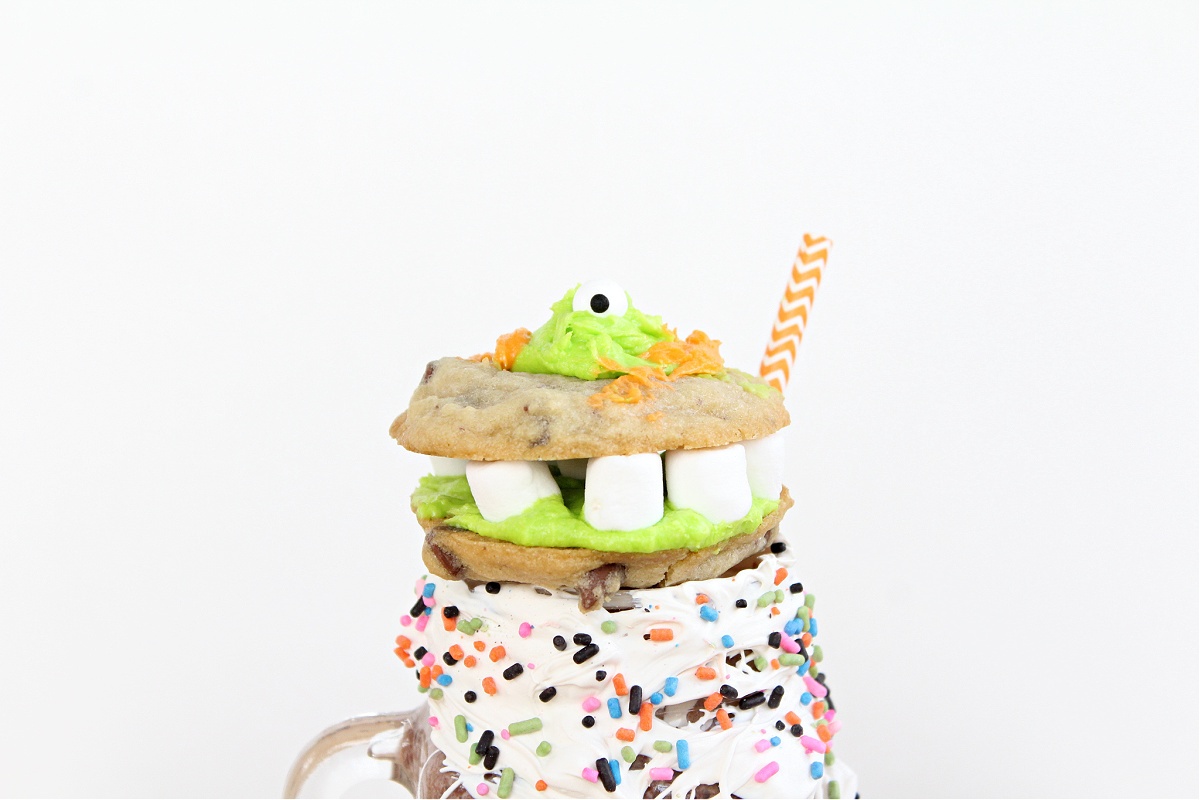 You guys loved my Halloween Monster Chocolate Chip Cookies so much last year, that I thought this year we would celebrate Halloween again with another sweet treat. Halloween is all about spooky treats after-all 🙂

The sound of Michael Jackson’s Thriller filling the air, pumpkins, candy, and people in costumes, are all signs that Halloween has arrived. Did you know that Halloween traditions began over 2,000 years ago? 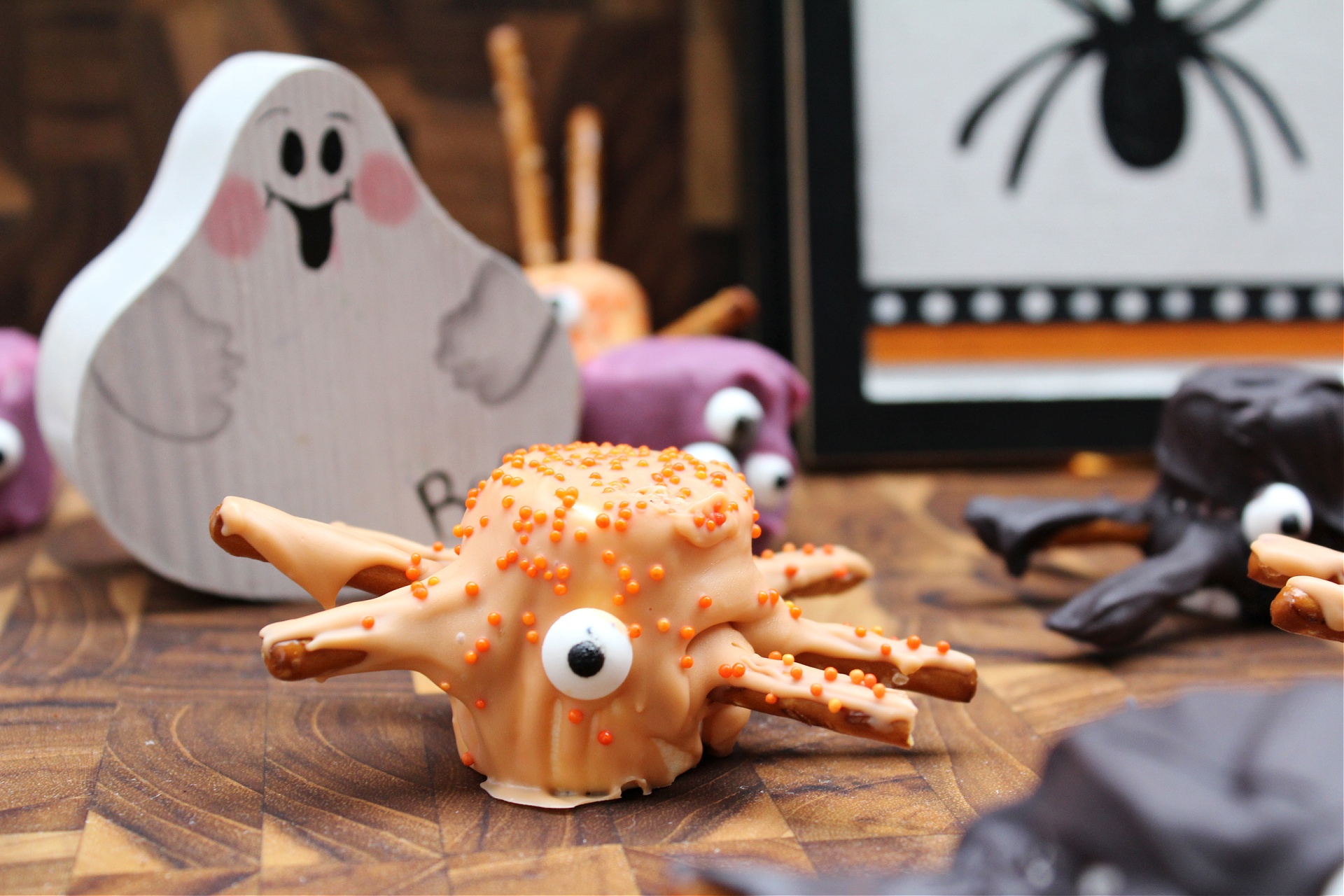 The origins of Halloween can be traced back to the New Year celebrations of the Celts 2,000 years ago. November 1st was the beginning of the long, harsh winter. The Celts believed that the night before their New Year blurred the boundary between the land of the living and the souls of the dead.

The Celts thought that malevolent spirits returned for this one night a year in order to create trouble and mischief, to make animals sick and damage the next harvest. At the same time, the Druids, or Celtic priests used the presence of the spirits in order to make predictions to guide them through the coming months.

The Pagan Festival of Samhain

During the festival of Samhain, (meaning “summers end”), as the Celtic New Year’s Eve was called, the Celts would dress themselves in the skins and heads of the animals they had recently killed. They would cull the weak and the old from their herds in an attempt to allow the stronger animals to survive on the meager food that would be available over the winter months.

Huge bonfires were built and they made sacrifices of crops and animals. At the end of the celebration, the Celts would take embers from the bonfire and relight the fires in their homes which had been extinguished earlier in the evening. It was believed that by doing this, the fire created from the embers of the sacred bonfire would offer protection during the winter months.

Feralia, Roman Festival for the Dead

By AD 43 the Romans had extended their empire to include most of the Celtic territories and in time the Roman festivals of Feralia and Pomona combined with the Celtic festival of Samhain. Feralia took place at the end of October when Romans honoured the passing of the dead. Pomona was a festival in honour of Pomona, goddess of fruit and trees.

During the 7th century, Pope Boniface IV moved the feast of All Saints Day from May 13 to November 1. Some critics argued that this was an attempt by the Catholic Church to eradicate the pagan festival of Samhain from the religious calendar. All Saints Day was a day to honour religious saints and martyrs and the celebration became known as All-hallows, All-hallowmas and All-hallows Eve.

During AD 1000, the Church made November 2nd All Souls day. As with previous festivals, this was a day set aside to honor the dead. Festivities included parades, bonfires, dressing up in costumes of saints, angels and devils. The three celebrations of the Eve of All Saints, All Saints and All Souls were collectively called Hallowmas.

As previously mentioned, the tradition of dressing up can be traced back to the Celts and can also be seen in Europe when at a time when people were especially superstitious. They believed that by wearing masks when they left their homes at night the spirits would leave them unmolested, thinking the wearer was from the spirit world and not a living soul. And in an attempt to prevent the malevolence entering the house they would leave bowls of food in an attempt at appeasement outside their doors. 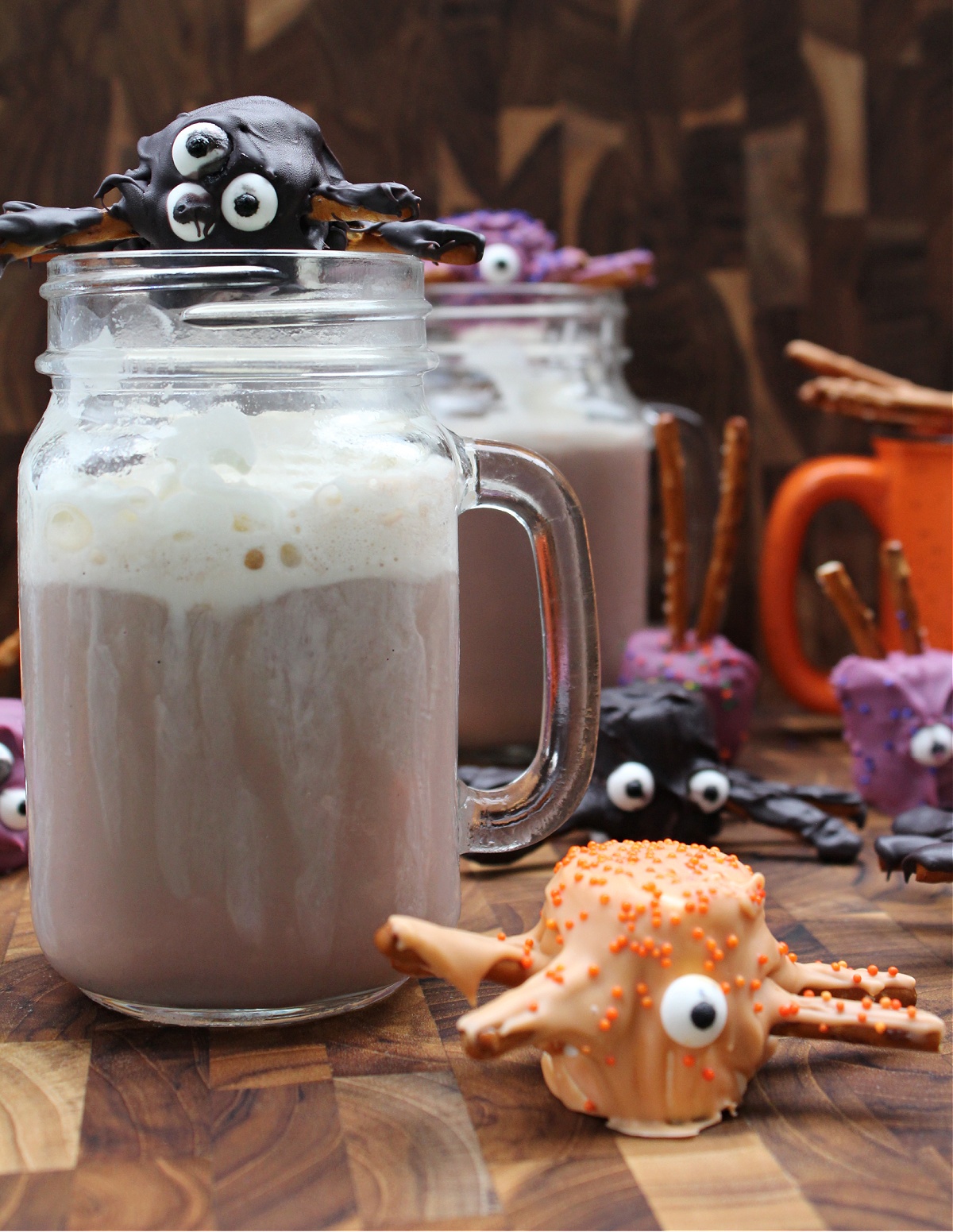 The History of Trick-or-Treating

The modern custom of trick or treating has its origins in a number of practices. An old Irish custom was to go from door to door collecting money, breadcake and food in preparation for the festival of St. Columbkill.

A 9th century practice was called “souling.” On 2nd November, early Christians would walk from village to village begging from soul cakes which were made from bread and currants. The more soul cakes the Christians collected, the more prayers they promised to say in memory of the dead relatives of the donors.

Today, children dress in costumes, and we celebrate with friends and family with fun treats, eats and trick-or-treating. 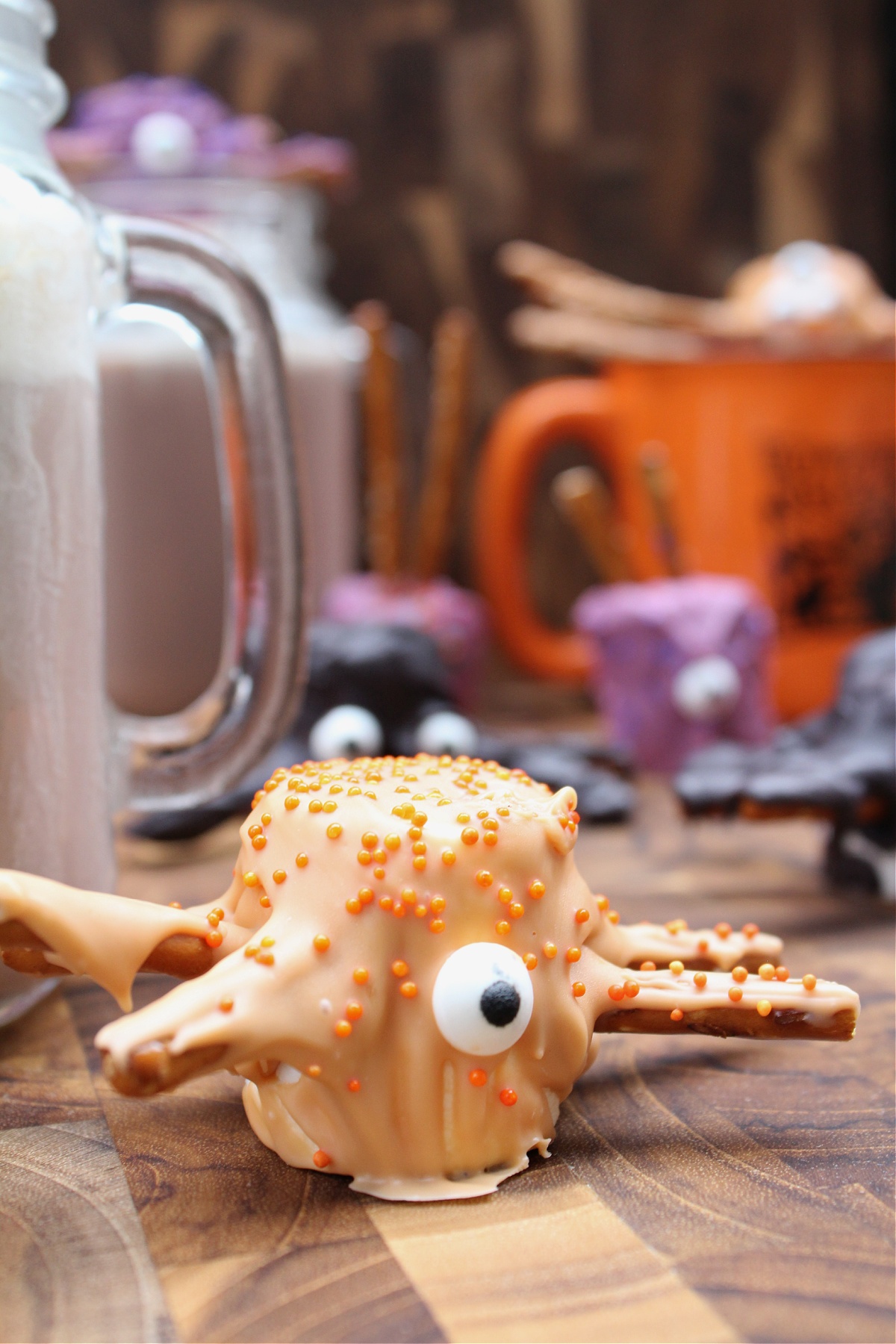 Chocolate milk is the Official Drink of Halloween, so be sure to serve nutritious chocolate milk as the ultimate Halloween treat! Warm it up for the easiest hot chocolate you will ever make 😉 Then top it with some whipped topping and one of my chocolate covered Halloween spiders and you’ll have yourself the perfect Halloween sweet treat. And you can feel good about the fact that chocolate milk is calcium rich, has bone building calcium and has 13 essential nutrients. 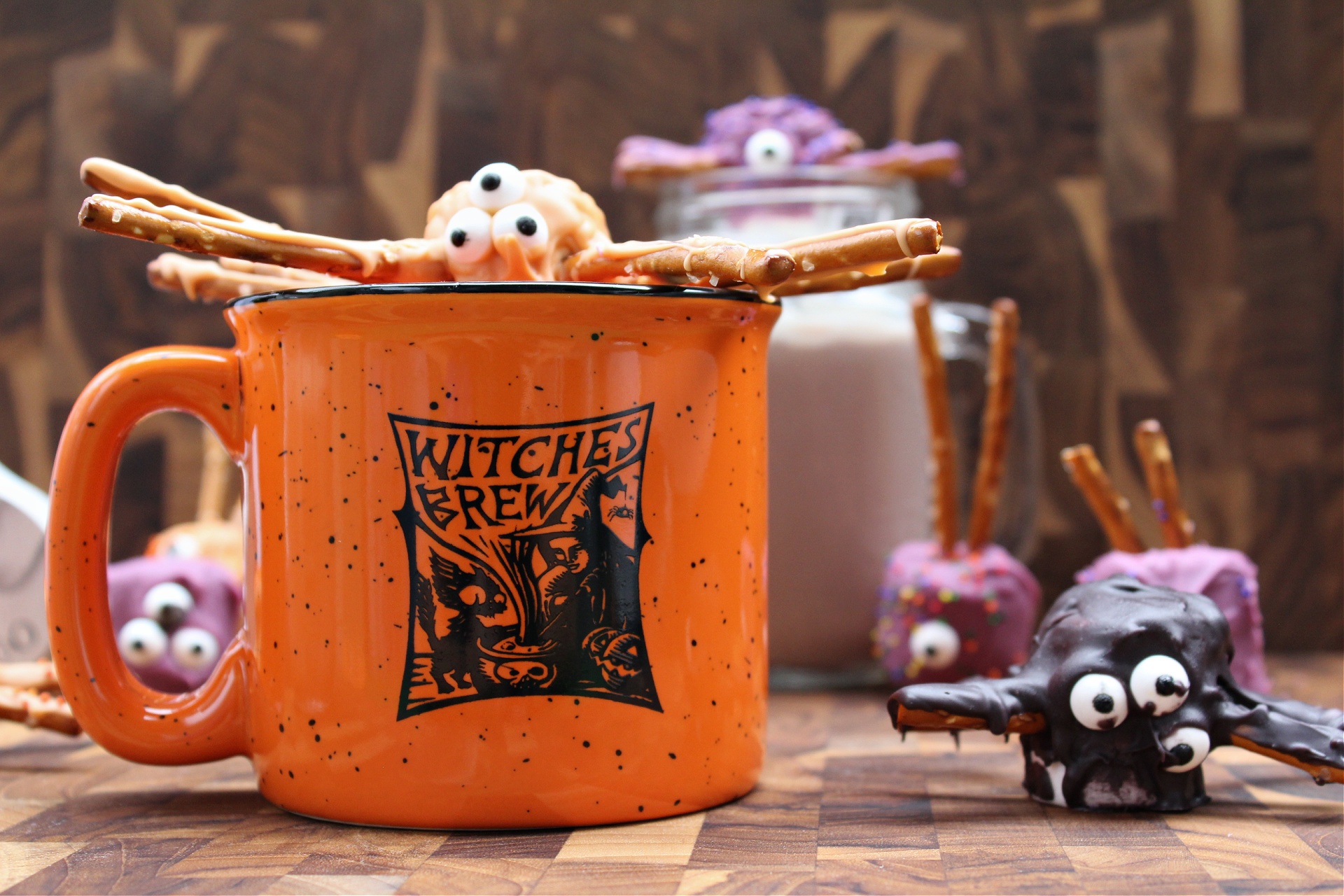 My Halloween Spiders are insanely delicious….you won’t be able to eat just one. And they are the perfect topping to your Halloween Hot Chocolate. 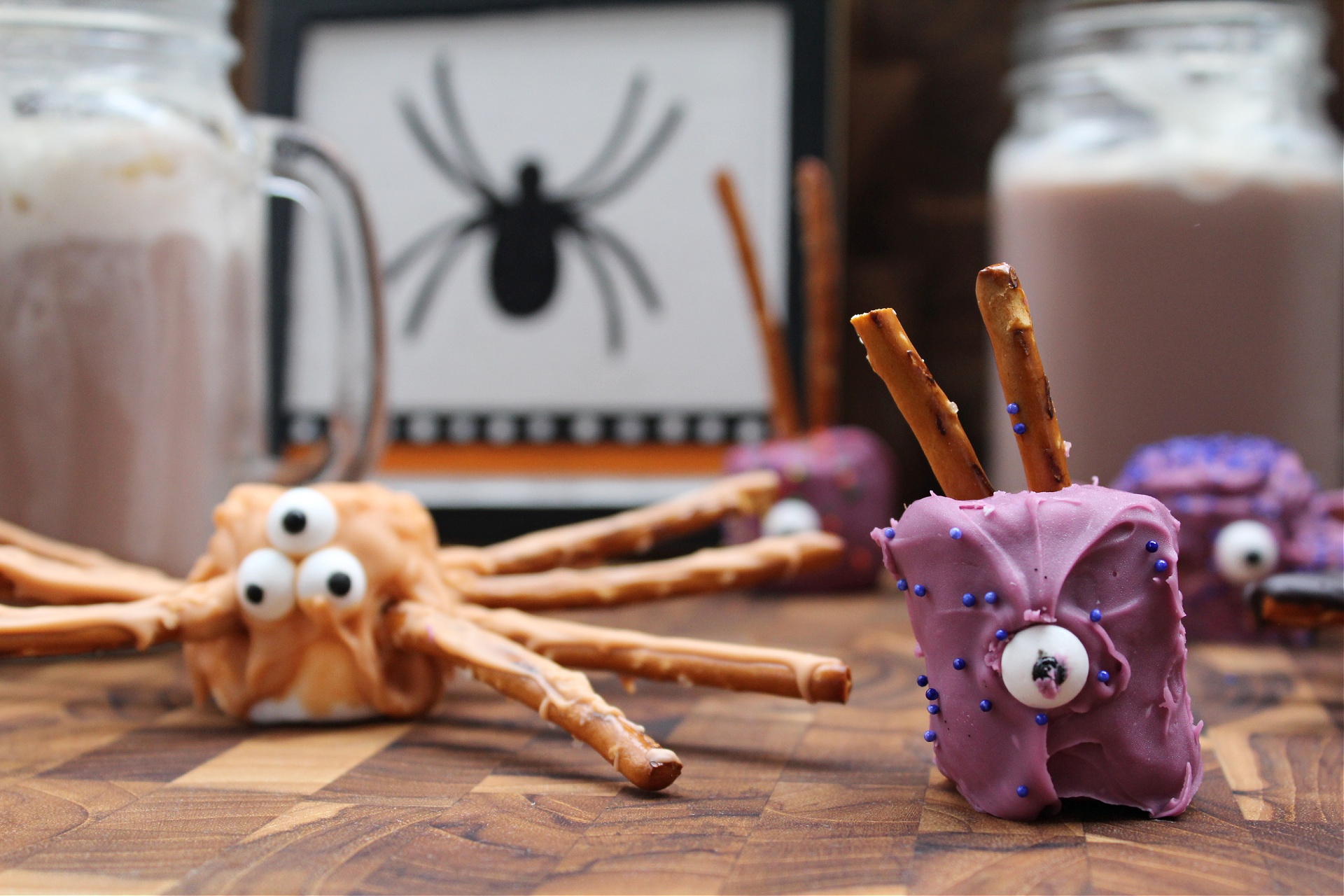 They are also super cute and a fun way to get the kids to help you in the kitchen. But they can be a bit messy. Like, you are bound to get some chocolate on your fingers. Worst case, you are going to have to lick your fingers 😉 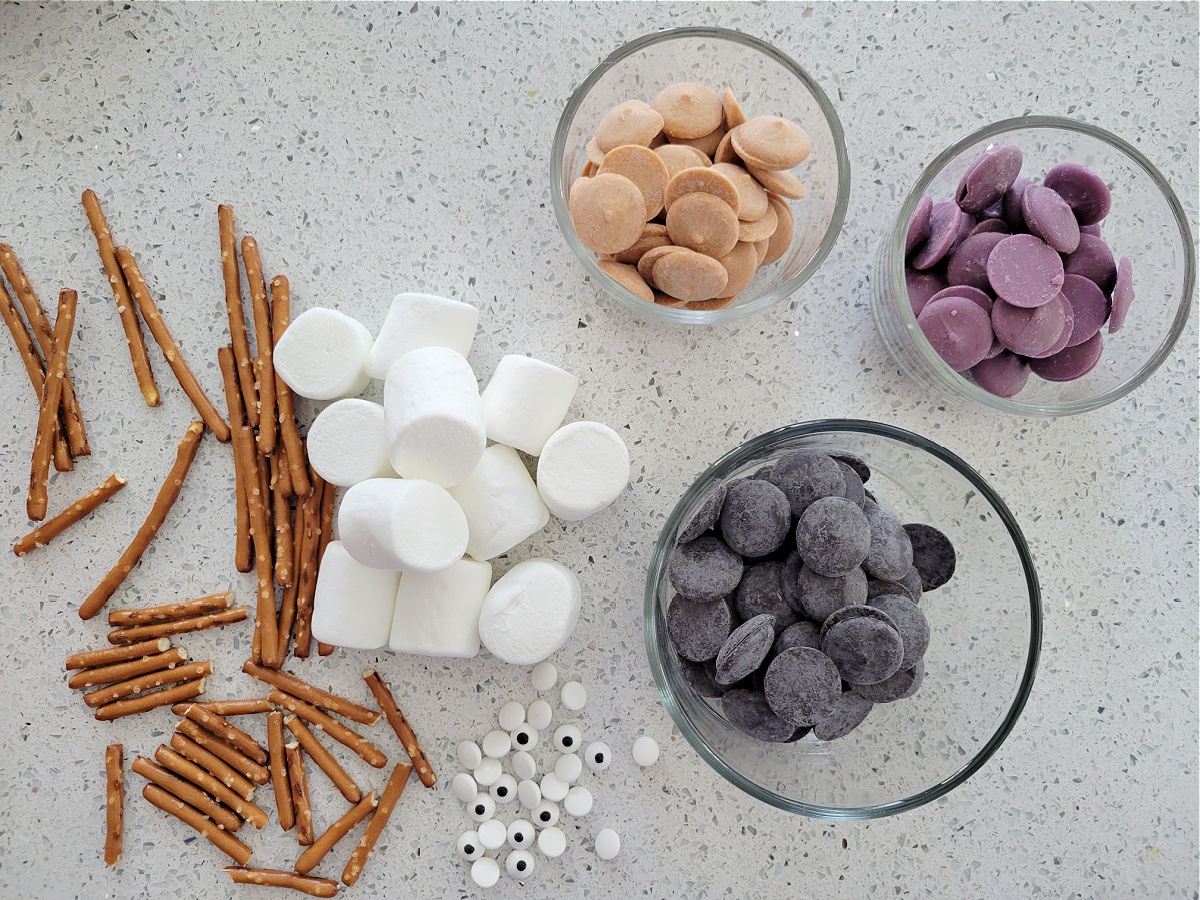 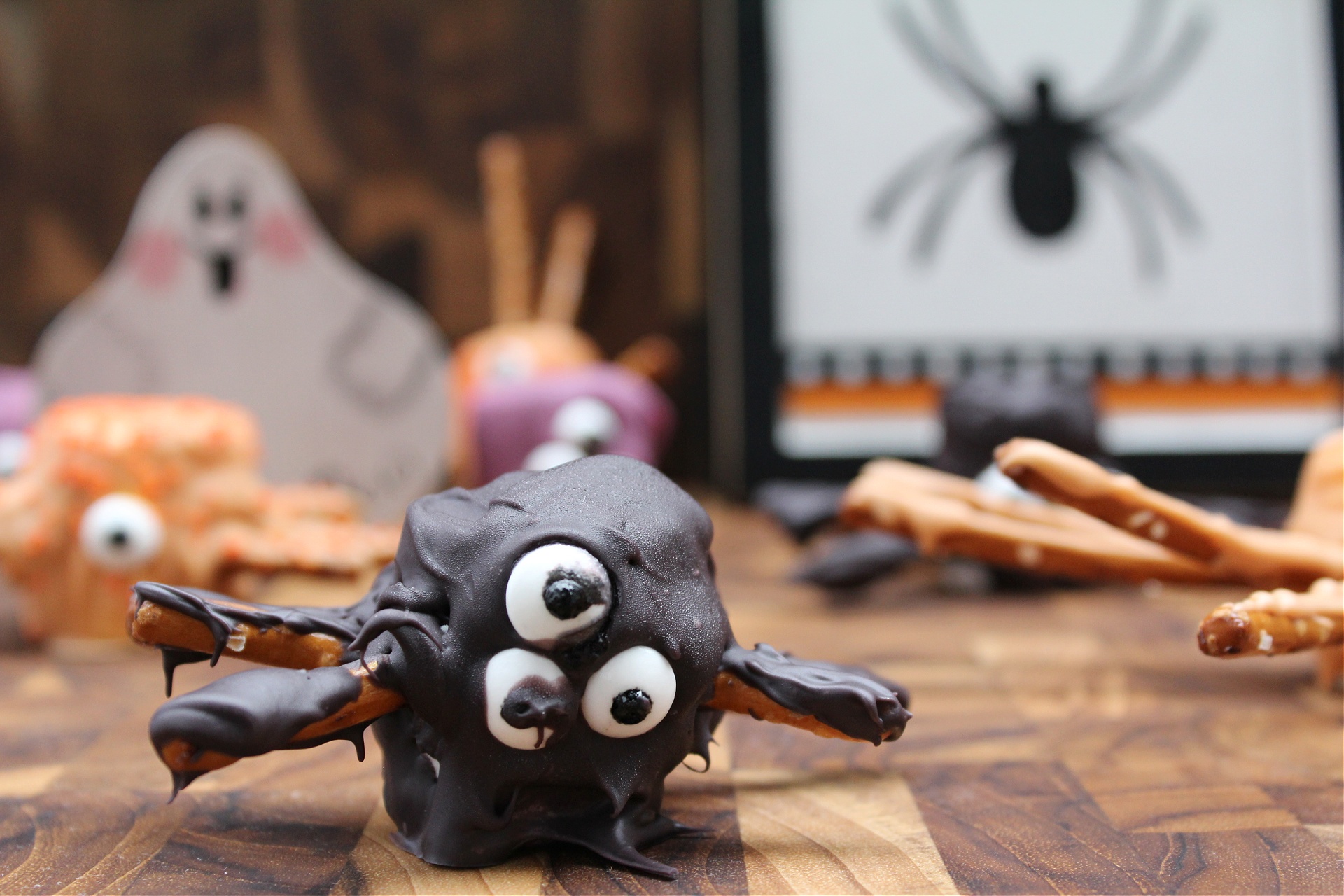 You will want to break the pretzel sticks in half if you would like to have your spiders has shorter legs. I have one big hot chocolate cup, so I left the “spider legs” long for that one. Melt the melting chocolate according to the directions on the package, add in a teaspoon of coconut oil to make it a bit more “liquidy”, this will make it easier to spoon the chocolate over the “legs” and “body” of the spider. Then you will first dip each pretzel stick end into the melted chocolate, then push it into the marshmallow. Once your “spider” has 6-8 legs, set it aside so that it can dry. Once dry, you can spoon the chocolate over the marshmallow and pretzels sticks. I used a fork to hold the marshmallow, but you can use your fingers. Either way, you are going to be chocolate on you somehow, some way, so just go for it 🙂 Once your marshmallow is coated, give your spider some eyes! Allow them to dry before serving them onto top of your Halloween Hot Chocolate. 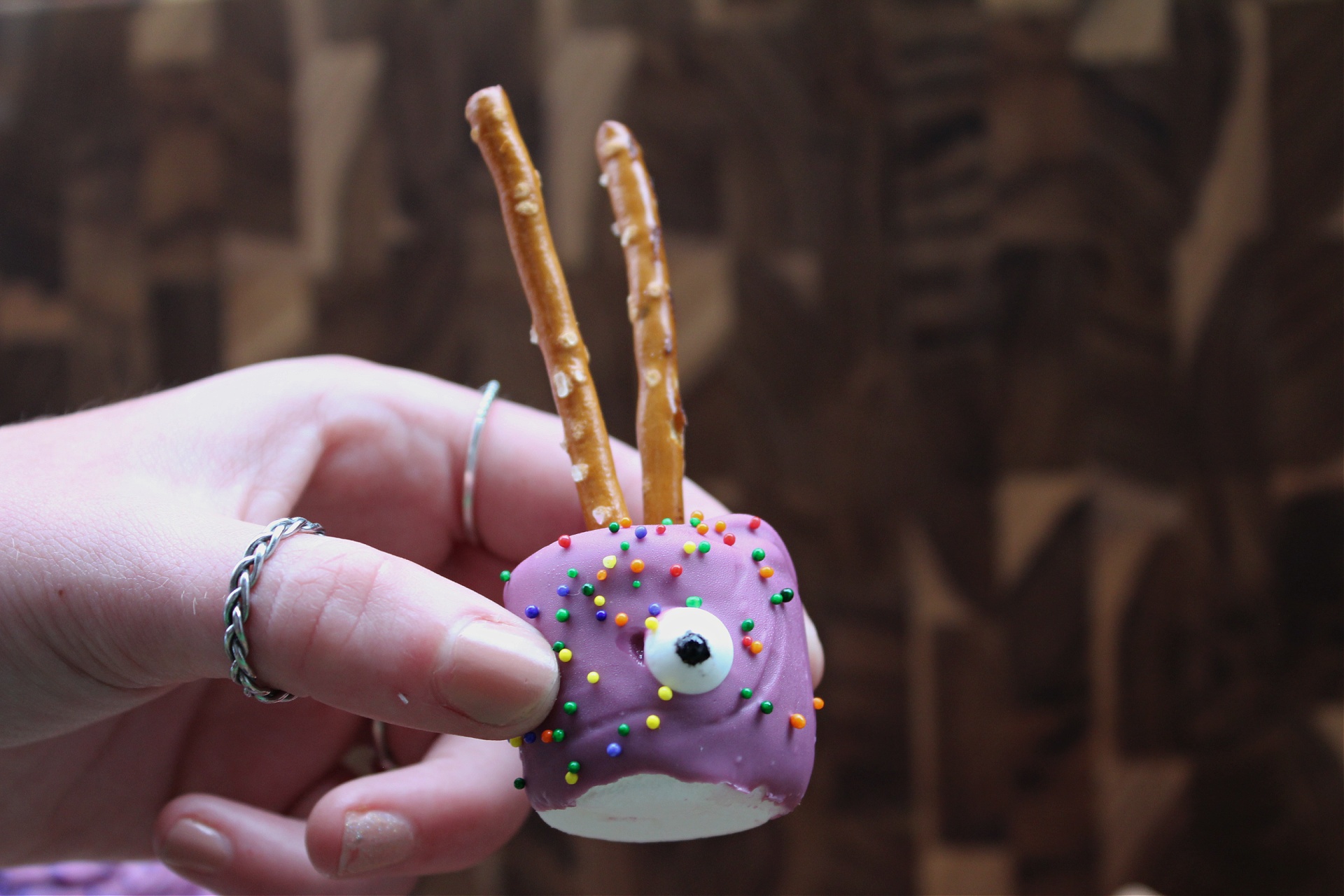 The kids also had fun making Halloween aliens. They simply dipped the marshmallows into the melting chocolate, gave it some eyes, some sprinkles, then used a pretzel stick (or two) as antennas.

They all turned out so cute! So, no matter how you decorate your spiders or aliens, I promise you, they will be a hit at your Halloween party. 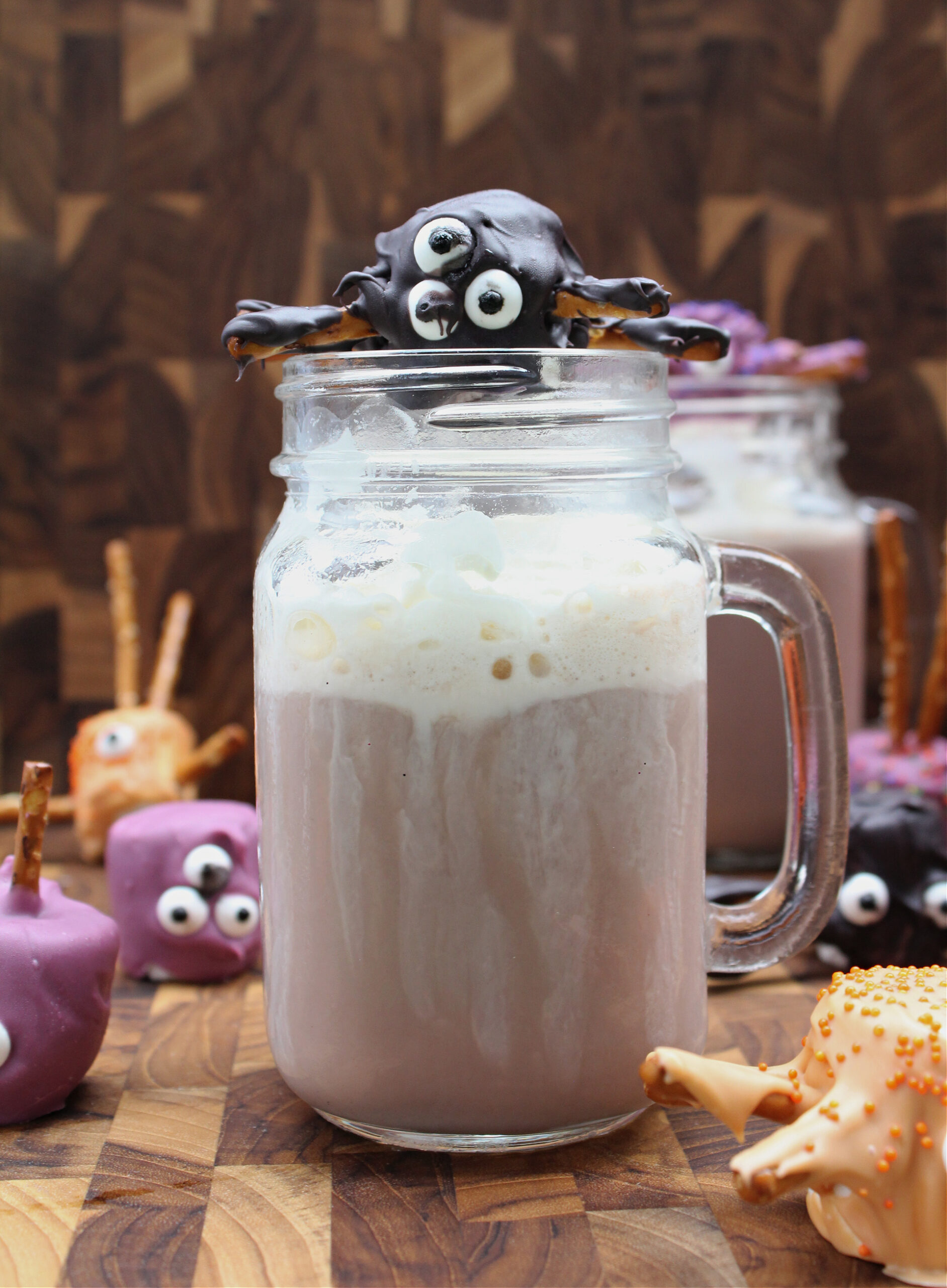 Key Ingredients For The Best Hot Chocolate EVER

How To Make The Easiest Hot Chocolate EVER

Simply pour chocolate milk into a microwave-safe cup and warm it in the microwave on 50% power until warm. Add in some cinnamon if you are feeling fancy. Top with whipped topped and a Halloween chocolate spider. For extra chocolate-y hot chocolate, add in chocolate syrup. Personally, I don’t think you need it though! You can also warm the chocolate milk in a small pot on the stove. 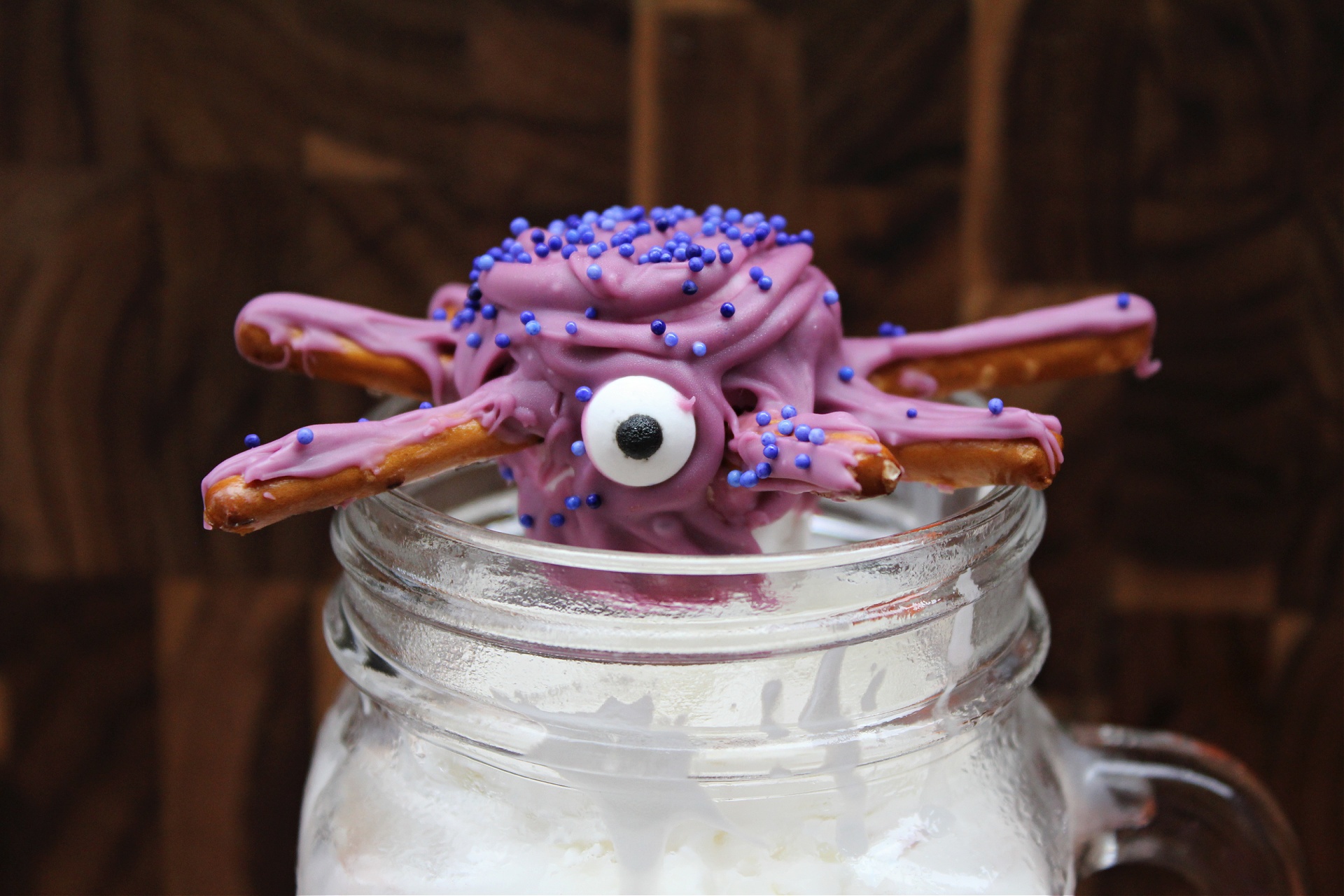 Now, here’s how to make your spooky Halloween spiders and easy hot chocolate. Be sure to Print It and Pin It so that you can make them every Halloween season. 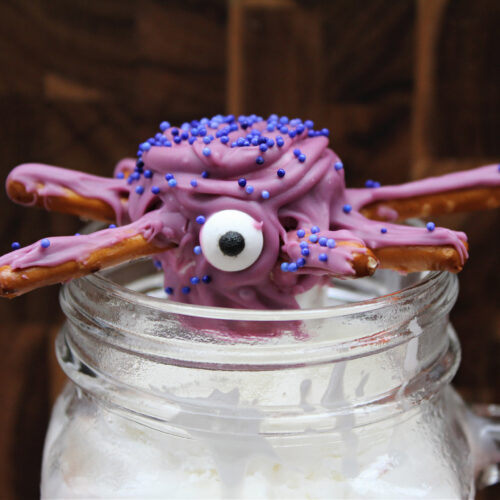 My kiddos took the marshmallows and dipped them into the melting chocolate and made little Halloween Monsters and Aliens too! Simply add eyes and make antennas with the pretzels. Have some fun with these! This is a great way to get the kids in the kitchen having some Halloween fun too!
Did you make this recipe?We want to see! Tag us on Instagram @foodwinesunshine or use the hashtag #foodwinesunshine

I hope you enjoy these Halloween Spiders and Hot Chocolate as much as we do!

Looking for some more Halloween treats? 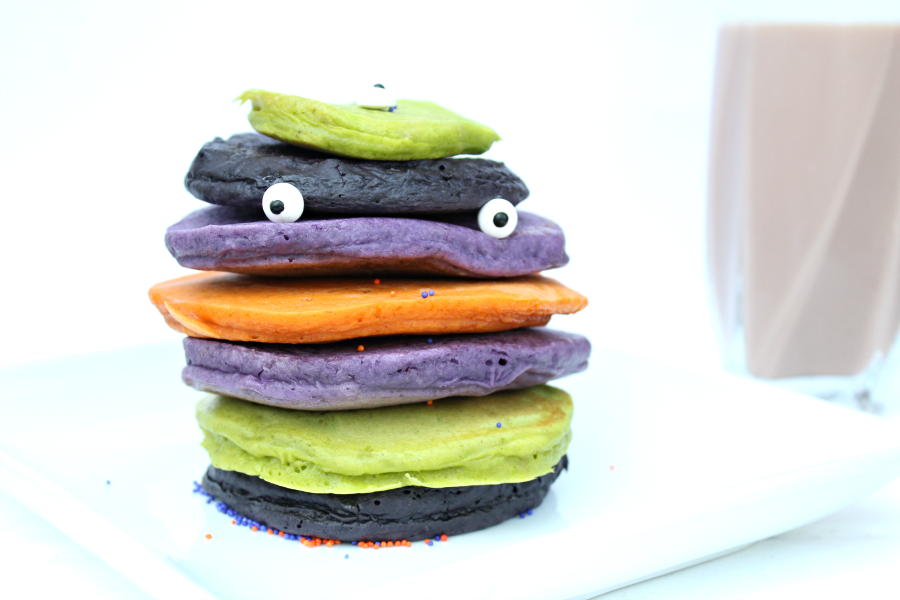 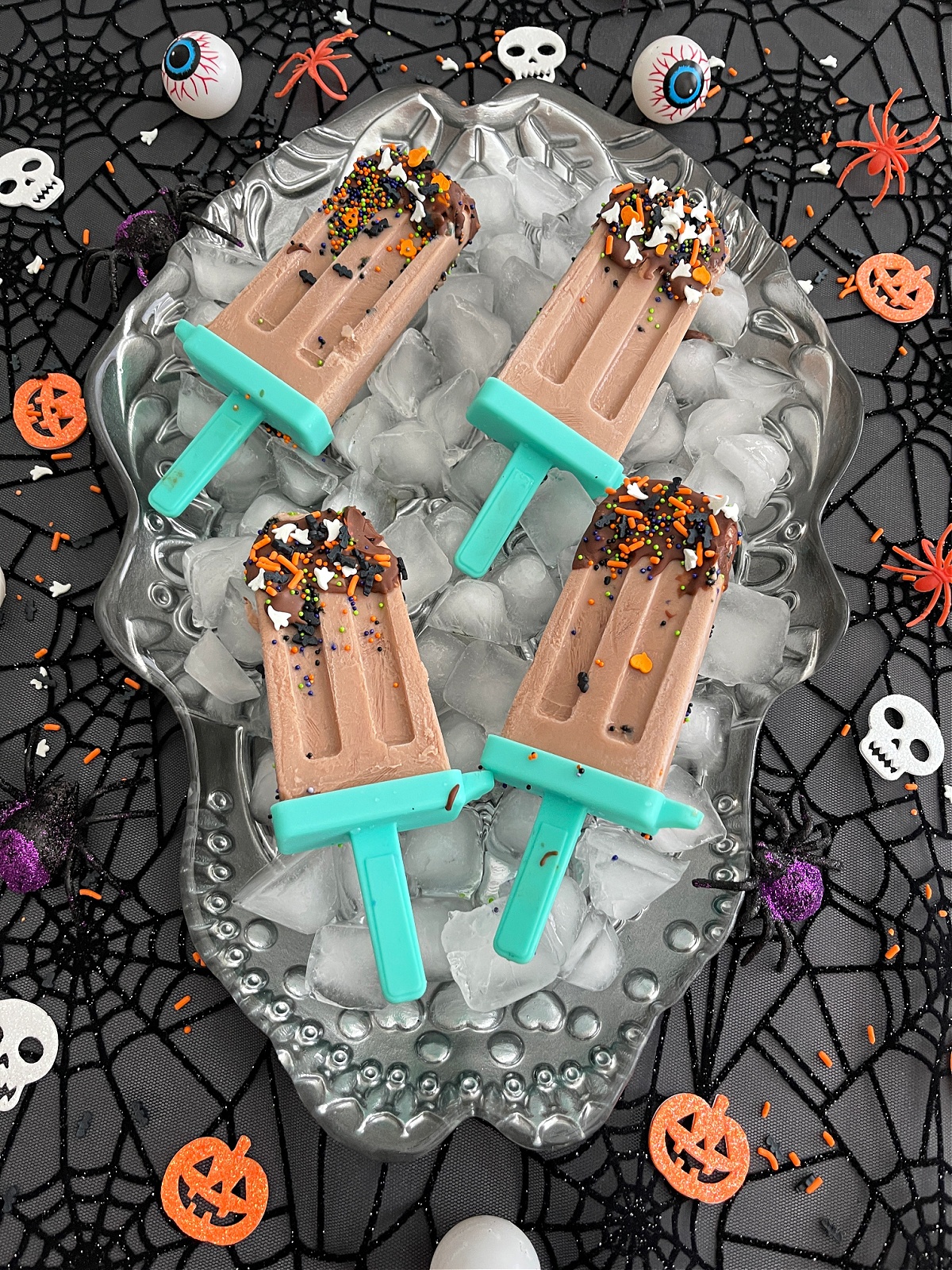 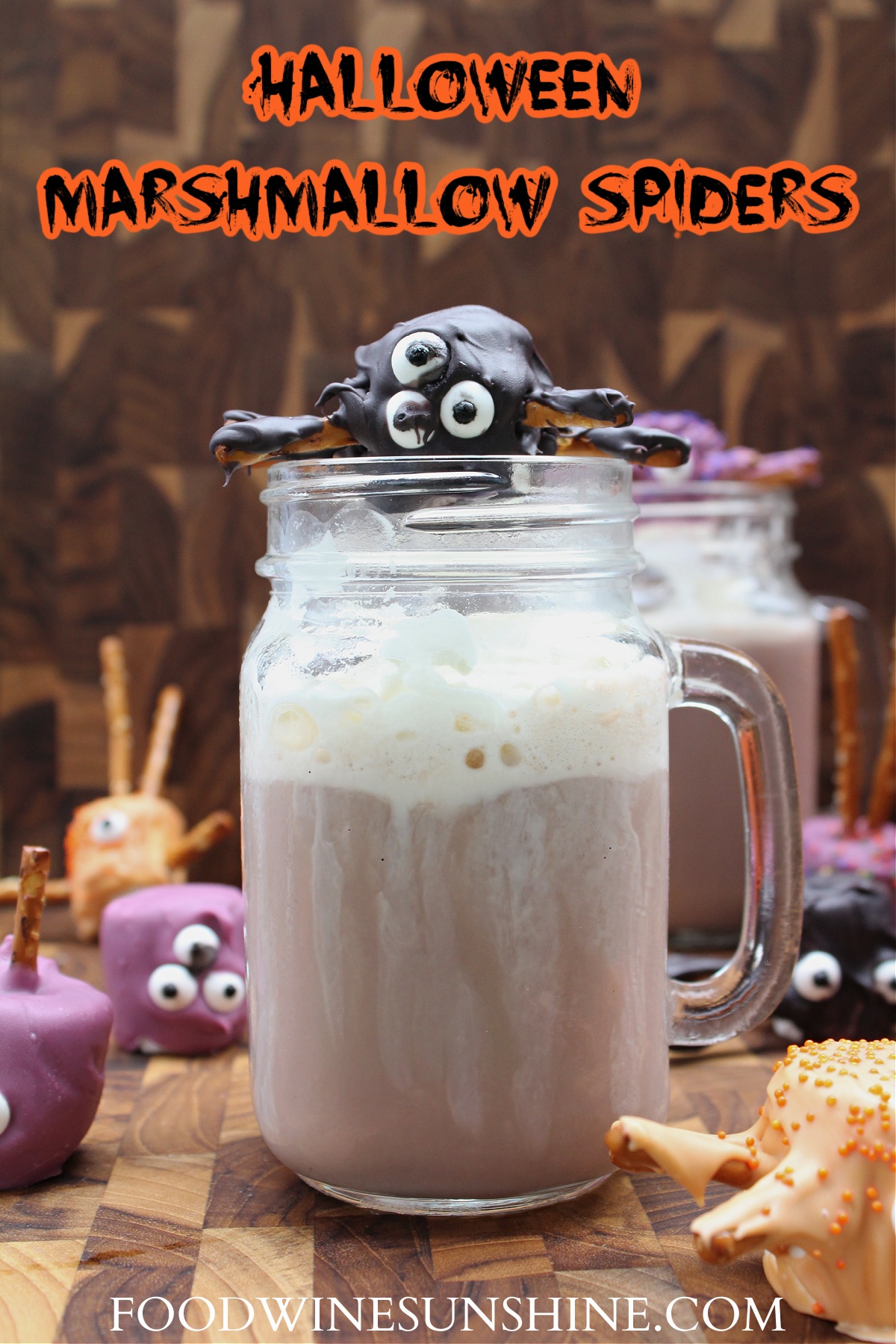 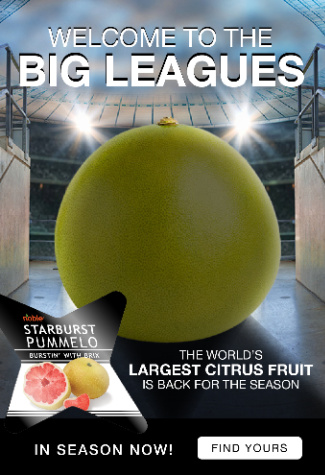