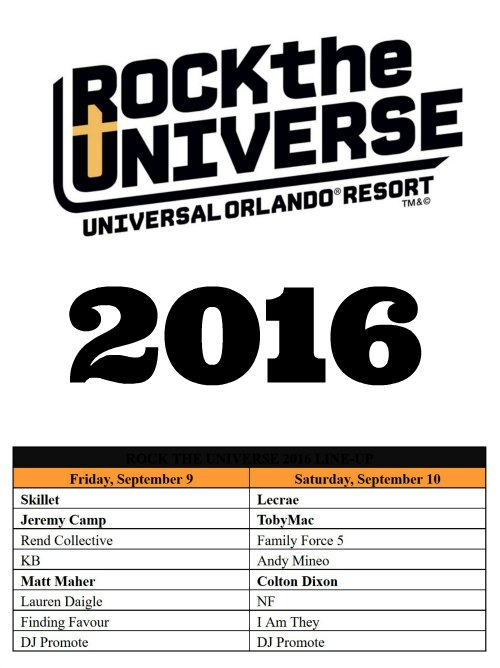 Florida’s biggest Christian music festival is returning to Universal Orlando this year on September 9 and 10!  There will be live performances by some of today’s most compelling artists in Christian music.

You will be greeted with rock, hip-hop, and gospel sounds in an unforgettable atmosphere that only Rock the Universe can provide. The festival also features the Fan Zone with more live music, electronic dance music with DJ Promote, autograph sessions with performing acts and more. You will also have the opportunity to experience a Saturday night candle lighting ceremony and access to Universal Studios Florida’s thrilling attractions – like Revenge of the Mummy, Hollywood Rip Ride Rockit – and more.

Learn more about Rock the Universe 2016

About Universal Orlando Resort
For 25 years, Universal Orlando Resort has been creating epic vacations for the entire family – incredible experiences that place guests in the heart of powerful stories and adventures. Guests can soar above Hogwarts with Harry Potter, swing above the streets with Spider-Man, grab a Krusty burger in Springfield, join the ranks of the Minions and so much more.

Universal Orlando’s two theme parks, Universal Studios Florida and Universal’s Islands of Adventure, are home to some of the world’s most exciting and innovative attractions. Its on-site resort hotels, Loews Portofino Bay Hotel, the Hard Rock Hotel, Loews Royal Pacific Resort, and Universal’s Cabana Bay Beach Resort are destinations unto themselves. Its entertainment complex, Universal CityWalk, offers dining and entertainment for every member of the family. And just minutes away is Wet ‘n Wild, a family water park.

Universal Orlando Resort has unveiled 18 new guest experiences in the past five years – powerful attractions, incredible dining opportunities and a dramatically themed hotel. And more is on the way. Coming in 2016 is Universal Orlando’s fifth on-site hotel, Loews Sapphire Falls Resort; and Skull Island: Reign of Kong, a groundbreaking attraction in Islands of Adventure. And in 2017 will come Universal’s Volcano Bay, an entirely new water theme park experience.

I love easy breakfast ideas. For me and the kids.

Stocking up on strawberries at #berryfest21? A yum

"Without agriculture we would be naked, hungry and

Do you know #whereyourfoodcomesfrom? If you answer

Happy Friday!  Yes, we officially made it to the

Hey!  Look!  They are BOTH smiling!  AD Probabl

Remember you can always look to me when you need m

It's Sunday. It's Valentine's Day. It's Daytona 50

It's a beautiful day for a glass of wine...wouldn'