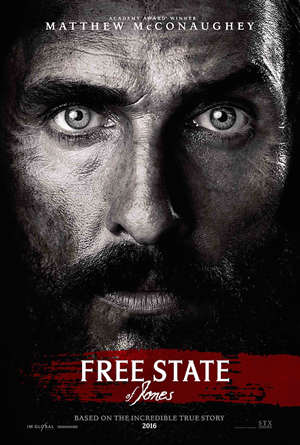 Matthew McConaughey’s latest movie FREE STATE OF JONES released in theaters on Friday, June 24th.  We had the opportunity to watch a screening of the movie, it is based on a true story, and stars  Academy-Award winner Matthew McConaughey as Newt Knight, a Southern farmer who became a leader that inspired a rebellion.

Set in the civil war era, this film brings to life the trial and tribulations that the soldiers and servants endured on a daily basis to defend their “rights”. The film questions the validity of those rights through several characters eyes with Newt Knight leading the charge against “slavery”. The movie was a stunning and vivid depiction of the plight from Slavery to Freedom and a must see for all who take our liberties for granted. No matter what your political affiliation, this movie should motivate each and everyone to vote this coming election and stop taking our liberties for granted.

Here’s a bit more about the movie:

Knight rallied those who believed that, no man ought to tell another man what he’s got to live for – or what he’s got to die for. He and his men fought for freedom, equality, and the ideal that, no one can own a child of God.

The film explores the issues of class inequality and race relations that permeate the south during the Civil War. It also tells the story of men and women during this tenuous time who have a strong faith in God, but are dealing with a moral struggle in regards to that inequality and the laws they are forced to follow.

Free State of Jones is a Must See Election Year Movie.

Still thankful for you. Our life. Our kids. Our fa

HEY TAMPA!  We see you! [AD] This picture was t

I love a one pan meal. Especially when it's as del

Cheers to November! I honestly can't believe it's

Drink Up Witches! So excited to see my friends at

Did I tell you all that my daughter started the cu

I can't remember the last time I was able to help